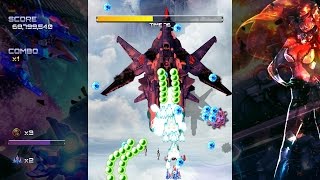 Ghost Blade: The first game using Dreamer is out!

Ghost Blade is the first game to be released using Dreamer engine. This game by Hucast is an exciting danmaku (弾幕: bullet hell) shoot 'em up that will challenge your skills, while saving the solar system and becoming the best pilot in the galaxy.

The game is available on the Sega Dreamcast and can be purchased on Play-Asia store. Click here to buy.

The Ghost Blade is an ace shoot 'em up for the Dreamcast with a focus on arcade action and an elaborate scoring system. Think 1990's shooter gameplay, with an impressive 2010 graphics style (made all the more impressive by the DC's 1998 release).

When Earth has been invaded by an alien race who threaten humanity's very existence. To destroy this menace, the Earth's Army launches its new powerful weapon: Ghost Blade, the most lethal, fastest spaceship developed by mankind!

The Ghost Blade consists of 3 different gameplay modes, with 3 different player ships to choose from. The included modes are '5 Stage Mode', a challenging 'Caravan Mode', 'Time Attack', and last but certainly not least: all new 2-Player mode! All modes support both TATE (“3:4”) and YOKO (“4:3”) output at 480p.